Jaipur Literature Festival 2012: The Echo in the Inaugural Address

20th January 2012
The threat of a ban, the artist’s dissent, self-expression, it was all there, in between the uttered words, at the inaugural session of the Jaipur Literature Festival 2012. The session was aptly called, Bhakti Poetry: The Living Legacy.

After an introduction and welcome by Festival Producer Sanjoy Roy; poet, literary critic, academician and activist Purushottam Agarwal spoke on bhakti poetry over the ages. He talked about the element of God as a child in bhakti poetry and about the poet’s equality and partnership in the relationship.

Agarwal proceeded to voice his opinion in his Hindi oration in the following manner, “No one has a right to ban literature. Just as a writer has a right to write, the reader has a right to read.” He also said, “Expression is the most common of the fundamental rights. The freedom of expression is not limited to writers and artists. Expression has to be for all who stand for it.”

This was followed by the keynote address of poet and translator, Arvind Krishna Mehrotra. This was less of a keynote address, but more of a recitation of the poems of Kabir, translated by Mehrotra himself, and some translations of Tukaram, as rendered by the Late Arun Kolatkar.

Tukaram’s poems offered a rare angle of Tukaram’s wife, the words describing her lament, even as the poet’s fascination with Lord Krishna had lead to the husband not performing his conventional duties to earn a livelihood.

The selected Kabir poems reflected and criticized the futility of religious rituals, even as Mehrotra read in an effective tone, the ultimate truth:

...one day,
says Kabir,
all bundled up;
you will be delivered
to death hell…

Mehrotra concluded his recitation by saying, “Had Kabir been here, at Jaipur 2012, he and Richard Dawkins would have had a lot to say to each other. Perhaps they would have found some common ground. They might even have made common cause…”

Thus did begin the literature festival, with us not yet knowing, with or without Salman Rushdie?
Posted by Snehith Kumbla at 18:48:00 No comments: Links to this post

Posted by Snehith Kumbla at 13:17:00 No comments: Links to this post

Back from the Jaipur Literature Festival 2012

We have returned after a week-long cloud walking at Jaipur. We were amidst writers, and what's more, we were getting paid for the same. The sheer volume of what was imbibed at the five-day fest will continue to resonate and echo for days to come. Starting today, we shall share with you quotes and anecdotes from the festival.
Posted by Snehith Kumbla at 14:39:00 No comments: Links to this post

The Girls from Finland

A friend's friends are presently visiting India, happened to meet them on Saturday evening, while they were doing their Pune leg, with the friend guiding them. Here is a summary of the information extracted from these two nurses-to-be.

Anna and Johanna, close friends and roommates at Helsinki, wanted to take a break after completing their nurse course.
So one fine day, Johanna asked Anna,"Would you like to go to India?"
Anna said,"OK."
That was it. The Euro's value against the Indian rupee ensured that expense was not a major issue for a short sojourn.

So, laying down the plans about five months in advance, the duo alighted in Delhi, got hassled by saree shop-owners, prospective guides and numerous street vendors. Their stay at India's capital was thus, anything but fun.

Their next destination was Mumbai, and from there on, guided by the friend, they tried various Indian food items, visited beaches, traveled in local trains, sung, loved the architecture and vibes of South Mumbai, and after three days, unwillingly left the city to arrive in Pune.

Conversation
Finland has temperatures between 21 to 25 degree Celsius in summer, in winter it can go down to -20 degree Celsius. It is something the denizens of Finland are used to, that they go skiing and indulge in other winter sports during this time.

The girls were very keen on what they were eating, sometimes, extracting from a paratha, strands of coriander stem and enquiringly about the same. They also had intent eyes on how we were going about it, one particular moment when we were gobbling Anise Seed (saunf) by handfuls had them look at us with asking eyes.

Then there were the jokes that you have to crack with care and caution, now what do you make them laugh at? It is usually with the aid of elements that are at hand, and you hope they are laughing more out of instinct than politeness. And that was that.

(This will seem to be a withheld, inconsistent information piece, for the purpose is such, the rest of the details go into a dairy.)
Posted by Snehith Kumbla at 18:03:00 No comments: Links to this post 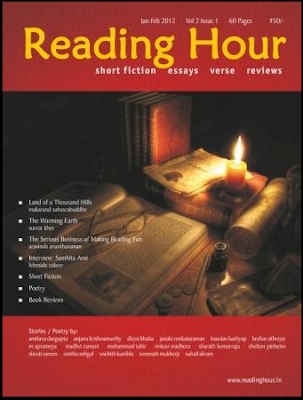 This is to inform that one of our poems 'Scrap Collector's Diary' has been featured in the Jan-Feb 2012 issue of Reading Hour Magazine.

Reading Hour is a rare Indian literary magazine that features short fiction, essays, verse and reviews. Published on a bi-monthly basis, the magazine completed its first year in Jan 2012. They also presently pay a nominal amount and courier the magazine and payment to the contributors, which is a gracious and sensitive gesture.Considering all things, the Reading Hour people make quite a good work out of it.

Wish more such Indian magazines provide us writers, poets and literary lovers with a common, converging outlet.
Posted by Snehith Kumbla at 20:43:00 No comments: Links to this post