As we trekked down to the Ronti Gad camp, the ground was a shiny, blazing green again. The mountains were all around us, submerged in vision. We were all more relaxed and conversational now. 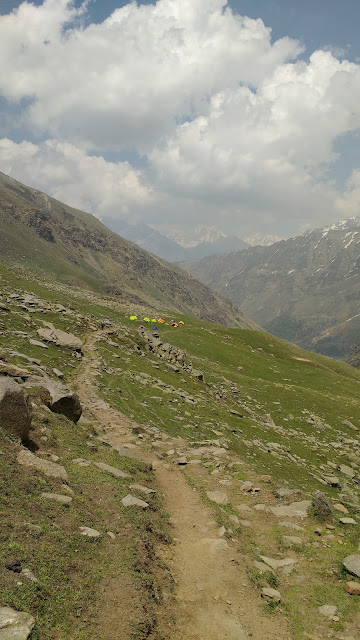 But as we neared the camp, the cheery weather began to change its texture. We placed our backpacks in the tents and began settling in when the clouds gathered above, passing swiftly. The porters began running for cover. Then the hailstones started falling like mini cannon balls. It was quite a sight, catch a glimpse of it in the video below.


An Afternoon of Mountain Gazing
For my first Himalayan trek, it made some story that the weather finally gave away hours after the summit climb. That this happened after we comfortably made our tents, is another notable occurrence. I couldn't imagine making that final climb with hailstones dropping heavy on us.

A major part of the afternoon was spent in the tents as rain followed. When the weather began to clear again, the great Himalayan summits further away came into view. Sitting there huddled in a group, gazing at a distance, as clouds and mist momentarily revealed majestic mountain tops was a glorious sight.

Dancing and Dreams
Before dinner was served, the evening was spent dancing in a circle to the latest Hindi film dance songs. Apart from the fun, the dancing also helped generate much-needed warmth. We had descended from 15,250 ft and were camping at 13420 ft. It was chilly after the passing shower and we needed the body heat. Most of the group members and a couple of enthusiastic, cheerful porters joined in. The porters were simple, open-hearted folk, they seemed at home in the mountains.

The night got colder as we retired snug into our sleeping bags. This was our last night outdoors, in such close proximity to the mountains.
Posted by Snehith Kumbla at 22:31:00