Posted by Snehith Kumbla at 18:17:00 No comments: Links to this post 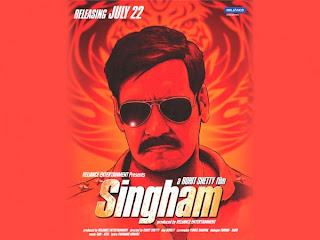 Thankfully, this remake of the Tamil original Singam (2010) is loud and playful in its violence, that the grimness and coarseness of the act doesn't come through, as it did in, Anil Sharma's Gadar: Ek Prem Katha (2001) and similar 'body count' movies. Neither does it have the little spark (beneath the redundancy) that Anubhav Kashyap's Dabangg (2010) had.

You have seen it all before, the good cop, bad man act. In true Hindi film and South Indian 'hero is god' mode, Bajirao Singham (Ajay Devgn, good act) is a no-nonsense, ferocious police inspector of a village in the outskirts of the director's favourite setting - Goa. His nemesis is the corrupt, aspiring politician, Jaikanth Shikre (Prakash Raj, superb in the exaggerated tone of the film), with whom our hero has a series of face-offs that forms the bulk of the movie. The heroine (Kajal Agarwal) is more about filling the mandatory formula, than to do anything with the story.

So fantastic and comic-book style are the film's elements that Rohit Shetty could have well made a good cop spoof movie out of it. All it needed was little tweaks in the screenplay. Alas, such is not the case, and we are full of laughs - both intentional and otherwise.

Much of the film's flair comes from the Singham-Shikre confrontations, mostly devoid of action, instead packed with engaging, over-the-top dialogue. Raj gets some quaint, crazy lines, which he pulls off superbly well, a mercurial performance. The action has Shetty's four-wheeler fetish coming up again, more of them are crashed and banged in style. The bare-handed punches are tried, tired territory, Devgn's newly acquired six-pack body only adds to the fantasy of sending scoundrels flying, twisting and sliding all over and across the screen.

The soundtrack and background score (Umpteen Lion roars) add nothing to the movie, and finally, in totality, Singham is familiar Hindi violent-film zone that is enjoyable in the hero-villain interplay, its performances and its light comic scenes. Bearable, we say. If you are the mass audience, this is for you. Cinema lovers - Your call.

Light Moment
Shikre does a Rajnikanth imitation before a group of policemen.
Posted by Snehith Kumbla at 19:37:00 No comments: Links to this post

Posted by Snehith Kumbla at 15:27:00 No comments: Links to this post 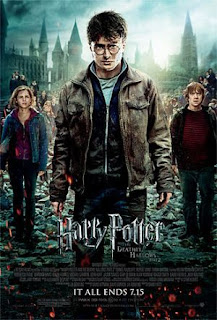 Not even 3D can elevate the dull proceedings of the last Harry Potter movie, filled as it is with prolonged dialogues and tepid action. There is not a single memorable moment of cinematic magic - the dark, grey environs only adds to the story's too stretched elasticity. On summing up, the movie series lost its mojo somewhere in the fourth part and never found it again. The main characters die without any noticeable effect on the audience, neither does Voldermort's presence evoke any sense of danger. Harry Potter did start as an engaging story for children, and, we can say - never grew up well. Strictly for die-hard Potter fans.
Posted by Snehith Kumbla at 17:13:00 No comments: Links to this post 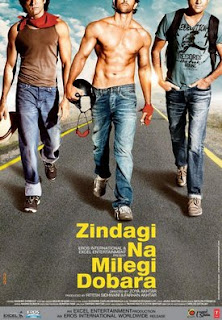 Three friends, take off on a preplanned bachelor road trip across Spain. That they are conveniently rich enough to do so, ensures that the few hurdles set in the screenplay are purely psychological, except for an incident-free night in a Spanish jail. Not an inch of the resplendent attire is out of place, the cars, and modern-life luxuries all make good Hindi-film sugar candy. If only they had more money-spending troubles, a nightmarish trip, after all it is a movie...Still, beneath the elite-audience stuff, ZNMD has its moments.

Arjun (Hrithik Roshan, refreshing negative shades) is a workaholic, tech-addicted stockbroker working in London. Imran (Farhan Akhtar, great coming timing) is a copywriter, with a great sense of humour, dealing with the news that his biological father is someone else. Kabir (Abhay Deol, good one) is grappling with his impending marriage to Natasha (Kalki Koechlin, deserves a bigger role). Laila (Katrina Kaif, one of her most assured performances) plays a diving instructor, who happens to meet our bachelor trio in Spain.

Compared to Zoya's daring debut Luck By Chance, this is a much-trodden territory of living life to the fullest/coming of age film. While, there is nothing landmark in this Dil Chahta Hai - Deja Vu, the well-defined characterizations, and the fact that we are never tired of the proceedings, makes it a good one-time watch.The sparkling one-liners, the inevitable life lessons ("A person should be in a box when he is dead"), do not seem preachy, a relief. The performances and rich-boy banter between the three male protagonists are a big plus. The challenge sequences of skydiving, underwater-diving and the famed Pamplona bull-run keep us glued. The high-profile cast probably limited the director's ability to experiment, for there are steps taken to ensure that each of the five main characters have at least one key scene to showcase their acting, sometimes, at the expense of stretching the story. Don't expect a diversion, and you shall be happy.

Music adds zing
Shankar-Ehsan-Loy have a peppy, sometimes one-track (all percussion & western soft-rock elements)  soundtrack to add able decor to the proceedings.
Posted by Snehith Kumbla at 15:30:00 No comments: Links to this post 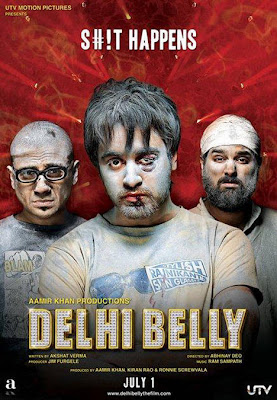 Do words come out more spontaneously, when one were to write about a movie one enjoys? Probably - YES, for all ‘good movies’ appeals to our certain senses, likes and perceptions that we have developed over the years?

Story
If you draw an outline, Delhi Belly’s story has been told in many unimaginative, repetitive ways before in Hindi and regional cinema. A portly man from Russia alights at Delhi Airport and hands over a package meant to be smuggled through an air-hostess Sonia (Shenaz Tresurywala), who is unaware of its contents. She passes on the delivery responsibilities to her fiancee Tashi (Imran Khan), a bored newspaper reporter, who passes it on to his obese photographer room mate (Kunaal Roy Kapur). The photographer, devastated with painful bowel movement, passes the package to his caricature making room mate (Vir Das), who gets the destinations mixed up. Then come the goons, missing diamonds, retrieval and chase, the police, a ‘lesbian’ sequence, and finally an old scooter crashing down.  It is the stench-funny contents within this framework that the film is endearingly disgusting.

Execution
This brilliantly held-together trashy tale (Writer Credit- Akshay Verma) of swear words, ribaldry and mistaken identities, fires all cylinders in its 96-minute telling of a story that is the most daring in its dirt content. There are orgasmic moments - fake and real, cracked ceilings, bosom-honks, human excrement (with exclusive booming sound design) and a lovelorn, gun-wielding lover. The swear words are just not there as props, nor are the toilet jokes, all wound deep in the story-characters cobweb, giving it reason to be shouted out loud and clear. With hardly a plot thread out of place in this deftly built jigsaw puzzle, it is the open yet controlled black, black humour that gets us through. Aamir Khan Productions took a risk and it paid off. Director Abhinay Deo’s second release, post the Game debacle, proves he has it in him, given inspiring content to work with.

Ram Sampath’s impressive evolutionary music (Hindi Soundtrack of the Year, so far) - the very skin of the movie, is effectively used as part of the background score snatches, rather than the common-place whole end-to-end spool, as we see in mainstream Hindi films. Amitabh Bhattacharya’s lyrics deserve more than a mention. The wicked genius of DK Bose, which no censor board could touch, and how a lady’s footwear (Sandal, sandal, sandal…) makes comic verse.

Hinglish or Hindi
The original Hinglish version is where the cosmopolitan Delhi city characters fit in to place. Having said that, yet to watch the 100% Hindi version. Yes, the film is tagged ADULTS ONLY, a very wise tag. It also means you need parents with a sense of humour from outer space to tag them along to this one. Do so at your own peril. The same goes for sensitive females too, it is a very male-world movie, no kidding, no chauvinism here.
Classic Touch
A burqa clad man picks up a glass of water from a tray and pours the contents to the drawn veil, and places the emptied glass on the table, even as a policeman seated beside him glances, bewildered.
Posted by Snehith Kumbla at 16:41:00 No comments: Links to this post

Posted by Snehith Kumbla at 16:54:00 No comments: Links to this post 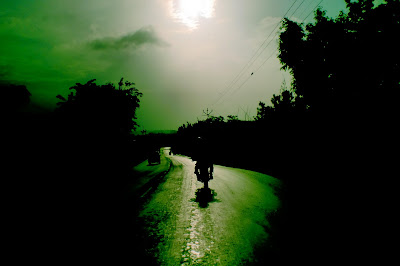 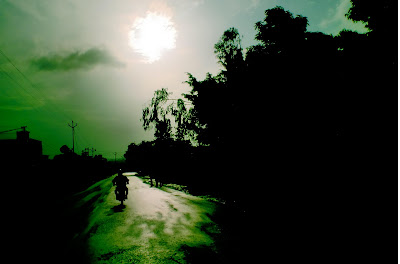 No special effects, no computer treatment, and we are still investigating how did the pictures come so good on a Sunday morning (10th July 2011), en route to the rejuvenating waterfalls of Mulshi. The scenario was thus - Nitin and I are on our respective bikes, with Wandercloud riding pillion to Nitin. So, at one 'moments of moments', Wandercloud turns a little on his seat and turns the camera in his hand my way. I am trailing about twenty feet away when Wandercloud clicks twice. Later when we check the photos, the green tinge  astonishes us no end. How the hell did it come in to the picture? We are still looking for answers.
Posted by Snehith Kumbla at 16:48:00 No comments: Links to this post

Posted by Snehith Kumbla at 10:25:00 No comments: Links to this post

Posted by Snehith Kumbla at 10:47:00 No comments: Links to this post

Marine Drive on a SUNDAY afternoon 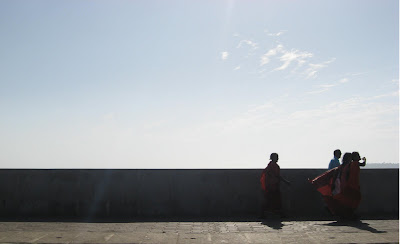 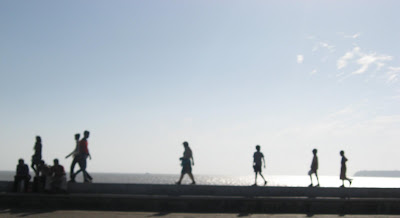 Posted by Snehith Kumbla at 12:48:00 No comments: Links to this post 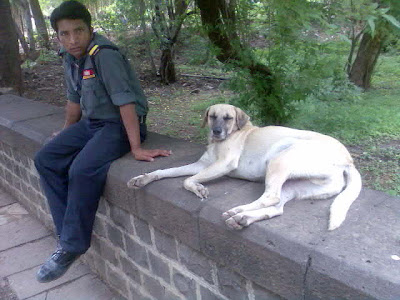