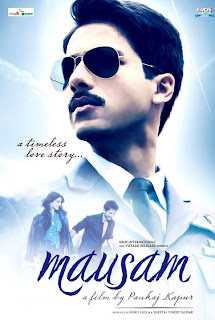 There is something mournful in a movie that is made sincerely and then falls flat due to its lofty ambitions. Sometime in 1992, Harry (Shahid Kapoor) or Harinder is awaiting a life-changing letter in his remote Punjab village. Apart from idling with his village friends, borrowing cars to race with trains, and having an empty purse, Harry falls for the 'new Kashmiri girl in the village' Aayat (Sonam Kapoor) at first sight. Soon, his bicycle chain starts slipping off near the girl's abode. Hand-written notes are exchanged quietly, dipped in water as evidence disposal, and finally, caught in a downpour, the girl promises to tell him,"Tomorrow." Only, the girl has left the village in haste with her family, as Harry hauntingly looks at a disappearing train. These initial parts of the movie are all charm and simplicity.

Cut to, suddenly, 1999, Scotland. Aayat at the Royal Academy of Dance. Harry is a moustached pilot visiting on a pilot exchange program. Huh? The lovers meet and just can't act like lovers. In one jarring scene, in which, we are subjected to a telepathic conversation, to another where a cigarrate lighter is excuse for a forced retro take on the classic Hum Dono song Abhi na jao...

In rising exasperation of the story's disregard for time lines and redundancies, Harry misses a marriage-possible meeting because he is summoned for the Kargil war. He doesn't inform Aayat for dramatic effect rather than logic. Thus is the period until INTERMISSION survived.

Part two. Harry calls up Aayat, but the forced turn of circumstances, wouldn't let the lovers communicate. Aayat is a travel freak now, moving from Scotland to Punjab to Ahmedabad to Scotland and back again to Ahmedabad with a sore face. The air force objected bombing scene is a sitting duck, like the hand video games of the nineties. By the time Harry's left arm is paralysed, I have to leave the theatre. I never thought I would walk out of a cinema theatre midway, ever. It is easier if you are at Westend. Of course, you don't get a movie as flawed each time. Only a bad movie made with confidence and a bloated budget, nowadays; a gem, sometimes.

So...
Mausam is slayed by a debutant director's ambition, that the story had to cover so many geographical settings and event references. That every historical event from 1992 to present had to adversely affect the lovers' lives is just too sad to be true. That James Cameron kept it spectacularly simple in Titanic (1997) - A ship, two lovers and an iceberg. Also the absence, of any hint of fire and passion between Shahid and Sonam only adds to the misery.

If all the venom is well-deserved, Pankaj Kapur (An amazing actor, no doubt, Director? Ahhh?) does have the promise of telling a good, simple tale. He shows his stuff, especially in the village scenes. We say, try again. Something simpler please.

Posted by Snehith Kumbla at 20:25:00 No comments: Links to this post

Posted by Snehith Kumbla at 13:02:00 No comments: Links to this post

the moon has burned through the
air-conditioning,
all the zombies have collected
at the right wing,
for there comes the famed of all
the thunder thighs,
a cell phone always to her ear
attached,
we suspect she has had a dreaded
transplant

yesterday, ninety freaks were refused
her facebook friendship,
two had fainted when she had looked
away from her book,
even as the company's secret report
attributes,
the zero attrition to her herbal lipstick,
her looks

binoculars have been seized, spy cameras
dismantled,
the security TV employees are regularly
mishandled,
a thousand projects have set sail, for her
from Europe, USA,
and many marriages and careers destroyed, at
her one finger sway

now that finance minister has declared her
prominent,
and provided her with female security, all
exorbitant,
her resignation letter itself, is ample for
a recession,
now you know why the markets melted, the rupee
attracted derision
Posted by Snehith Kumbla at 11:22:00 No comments: Links to this post

a room grim faced,
school created silence,
fear nausea in the air,
waiting for the next order,
drowning in xerox copies,
lunch with unrecognisable dishes,
curvaceous angels of flesh,
rustle their beauty dust,
and by evening,
the cage is ready
Posted by Snehith Kumbla at 20:24:00 No comments: Links to this post 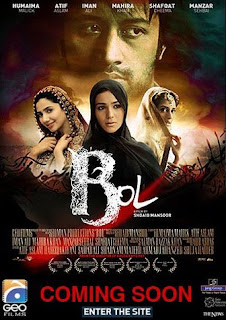 Even as a woman is condemned to be hanged in Pakistan, her last wish is to be allowed to tell her story to the world from the gallows. Even as newspaper reporters and the TV media collect below her, she begins her tale.

Somewhere in bustling Lahore, a Hakim (Manzar Sehbai) in want of a son forces his wife to give birth to seven daughters. After the eighth-born boy is discovered to be a hermaphrodite, the eldest daughter Zainub (Humaima Malik) decides that enough is enough, and has a vasectomy done on the mother. The tyrannical father, feeding the family on a dwindling income, is enraged at the turn of events. The fiery venom from the father’s mouth finds its answers in only Zainub, even as the Hakim interprets religion to suit his interests. The women are not allowed to leave the house, nor are they allowed to study. The neighbours try to secretly help, with the son allowed to venture out to earn from his passion for drawing, and tragedy follows. Repression has never done anyone any good.

Pakistani Director Shoaib Mansoor’s last release, the sincere Khuda Ke Liye (2007) had a genuine issue, and more so, does Bol. The proceedings could have had a tighter screenplay at instances, and there a few over-the-top moments, the effect in totality is devastating to a degree. The consequences of suppressing human freedom, the caged lives of woman, and the dreariness of a compromise-filled life is all brought to the surface. A must watch.

Clean Slate
Note has to be made of the performances, all up to the mark, with the famous singer Atif Aslam making it to the supporting cast. Again, as in Khuda Ke Liye, the soundtrack is clean and heart-felt, Indian Hindi film composers can certainly learn the importance of not mashing in western elements for the sake of sounding cool. The standouts and these are not the only ones – two Atif-Hadiqa duets Hona tha pyar and Kaho aaj bol do.
Posted by Snehith Kumbla at 18:10:00 No comments: Links to this post 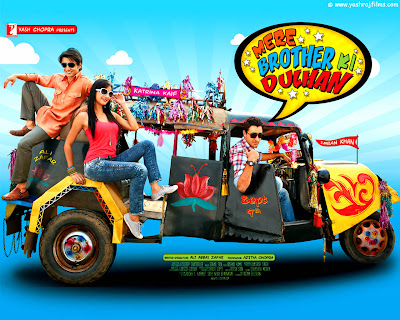 The commercial Hindi film romcom (romantic comedy) in the last two years, by default, has wealthy characters, thus sweeping aside with any monetary hurdles in the screenplay. London-based Luv (Ali Zafar) calls off a five-year relationship with his girlfriend, following an altercation. Fifteen minutes in to ‘singledom’ he calls up his younger sibling Kush (Imran Khan) in India, asking him to look for a suitable bride for an impromptu marriage.

Post the mildly amusing reference-filled title song, and rushing through a predictable unsuitable band of prospective brides (stupid, foolish and crazy in typical Hindi film treatment), the right match is finally found in Delhi. Only, the London-born Dimple (Katrina Kaif) is a former college mate of Kush, and as he remembers - rebellious, a beedi-smoker and alcohol 'binger'. None of this is revealed to the parents, as after a ten minute provocative (the movie’s best, original moments) video chat, Luv and Dimple assent to the wedding.

Even as both parties collect at Delhi for the engagement, Kush accompanies Dimple to fulfill her desire to live life to the fullest before the D-day. Even as the engagement takes place, Kush realizes that he is in love with Dimple. Inevitably, he declares his love to Dimple who, after a thundering slap, assents. The plot that Kush, his friends and Dimple hatch to turn the tables on the marriage forms the rest of the movie.

All sugar candy in the location, attire and scenery, the film picks up after a tepid laugh-miserly half-hour, but only just. The promised jokes come in a trickle; all the tribute paid to various Hindi films is sadly devoid of any wickedness. Thankfully, the story follows a linear path that keeps us interested. Imran Khan puts in a sincere performance. Katrina shows that if she is given a breezy, cheerful role minus complications, with an excuse to use her accented Hindi, she can act too. The screenplay overshadows Ali Zafar’s is a fresh performance, decent, we like it whenever he makes it to the screen. The supporting cast are all good, especially Kush’s friend. Dimple’s mentally challenged brother is a stereotype best avoided. A bearable one-time watch.

Posted by Snehith Kumbla at 10:04:00 No comments: Links to this post

Our haiku in WHR 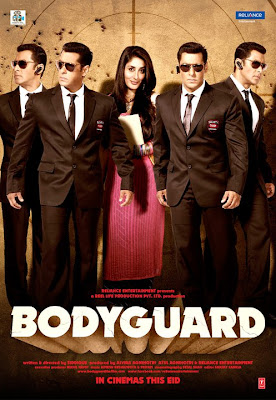 The three consecutive Eid releases of films starring Salman Khan Wanted (2009), Dabangg (2010) and Bodyguard have a pattern to it. It’s a template that has finally got tiresome, the lack of creative control of the directors is certainly telling in all three instances. Khan’s introduction with exaggerated fight sequences, followed by a song visual extolling the hero, followed by a semblance of a story packed with more fight sequences and songs, the Khan shirt unravelling to profile the famous topless body and a happy villain-killing ending. While Wanted was a new experience in its presentation for the Hindi film audience, Dabangg had the spark of originality, a celebration of formula beneath its redundancy.  No such welcome escapism here.

Lovely Singh (Salman Khan) is a bodyguard. As the loose narrative unfolds, Lovely’s dad, also a bodyguard, succumbs to a road accident, while his pregnant mother is saved by a wealthy landlord Sartaj (Raj Babbar). Years later, Lovely is called by Sartaj to guard his daughter Divya (Kareena Kapoor) at her college. There is no back-story on why Sartaj or the daughter is targeted. Anyway, Lovely’s constant presence irritates Divya to such an extent; she pretends to be a girl in love with Lovely. The medium is the cell phone and an unidentifiable number. Events so unfold that Divya falls in love with Lovely, but for some unfathomable reason, she doesn’t reveal her identity. The villains are mere props, a brief but sturdy turn by Aditya Pancholi needed some space. The final thirty minutes go horribly wrong in its blending of love, betrayal and sacrifice. These parts needed flesh and reason and the script provides no explanation to the bizarre happenings.

As for Salman flying from one moving local train to another one's rooftop, his power punches and bone crunches, we have seen enough. They are like a much-repeated product advertisement, not a film. Salman is earnest, his meeting scene at the garden is one of his best acted parts. Kareena plays her part well, the weak characterisation lets her down. The supporting cast has little to do. The comic attempts are an irritant.

Rarities
An obese man sports a t-shirt – SIX PACK COMING SOON. The other moment - Rahat Fateh Ali Khan lifts an average Himesh Reshammiya composition with his rendition of Teri Meri Meri Teri. Pritam’s guest composed I love you is a pleasure to listen, zestfully sung by Ash King and Clinton Cerejo.
Posted by Snehith Kumbla at 12:00:00 No comments: Links to this post