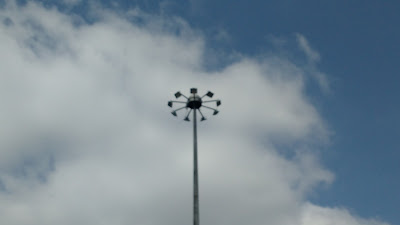 On that particular, clear-skied Sunday at the Pune Railway Station premises, this single pole of floodlights stood tall, hovering and unblinking in vision.

Way below, a collected sight of bulky backpacks, protruding water bottles, men and women dressed largely in track pants and t-shirts. The train to Delhi was running late by an hour.

Early introductions, teeny weeny bits of wisdom and initial getting-to-know-each-other jokes were exchanged. A sample,"You can keep the backpack down now, the train is yet to arrive." That's right. Why am I bloody carrying it while we are just standing and conversing here? That's similar to a scene I often witness at my colony, men absent-mindedly step out of their homes wearing their helmets. I place my backpack among the heap of others. It is a sight. Like it was the first day of school for the backpacks or something, and they were getting to know each other, awkwardly, innocently.

Meanwhile, I take this picture. It is only after returning from the trip that I gauge its significance. An unwitting hint at elements we are to encounter over the next fortnight. Heights, expanse, open skies, and beautiful, mystical mountains...
Posted by Snehith Kumbla at 11:49:00