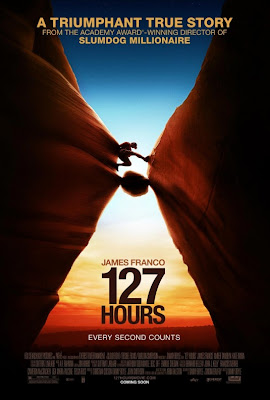 In April 2003, Aron Ralston, a 28 year-old American hiker and adventurer, finds himself alone and in deep trouble. Even as he hikes through a part of the Grand Canyon, called the Blue John Canyon, Aron stumbles through a wedge, a rock topples, and crushes his right hand against a rock wall. Unable to budge the rock, and with no one of his family or friends informed of his whereabouts, Aron is on his own.

Death seems inevitable even as five days pass, Aron makes occasional recordings on his digital camera for his potential finders and his parents. He passes in and out of hallucinations, recalls the past, and meanwhile, still tries to chip away at the rock, more at an attempt to keep warm. Finally, the desire to live swells in Aron to such an extent, he takes desperate measures.

Achingly real, Danny Boyle's take on this astonishing tale of survival, is a mix of vertical, collage-like visuals, precise, humourous storytelling and one hell of a performance by James Franco. The critical scene,while horrifying, (A couple of them passed out at the screening) is still essential to convey Ralston's spirit.

Decorated with apt music from various pop artists and a quality music score by A.R. Rahman, 127 Hours is one roller coaster of a cinematic ride. Go for it.
Posted by Snehith Kumbla at 18:11:00 No comments: Links to this post

The Republic Day arrives with a comfortable familiarity every 26th of January. Morning, the blare of loudspeakers playing patriotic songs…The flag hosting in housing colonies accompanied with the sounds of clapping, the distribution of sweets. School children happy at the assembly, energetically joining the call – Jai Hind!

The Republic Day parade playing on the television screen...wonder what the Indonesian President thought of our military display…does it make our foreign guests insecure, each year, as they watch tanks, missiles and other artillery pass?

Sports day. Some housing societies rent playgrounds, and there is the good old lemon and spoon race, a cricket match, and the kids making the most of the wide-open spaces. Gandhi plays on the channels for the umpteenth time, we love seeing the videshi Ben Kingsley mouthing Hindi perfectly. On cable channels there is Border, loud jingoism, we still cry when the Indian soldiers die and win a battle despite being outnumbered. Late evening. The patriotic songs are still playing on All India Radio. News channels have left Republic Day for next year. Breaking news: Film actor elopes with mistress…

The next day - yesterday is forgotten. We are stuck in a traffic jam. We are going to be late again for office, the mobile phone rings...it is the boss. We shall relive Republic day again, on 15th August. Until then…
Posted by Snehith Kumbla at 09:00:00 No comments: Links to this post

Blessed with a unique voice, and having an amazing range and depth to give voice to the intricacies of Indian Classical music, Bhimsen Joshi was one in a million. Then that is just an expression, he was of a much more esteemed class, as all artists are, and like all of them, his loss will affect us. For artists send positive vibes all over, are full of happiness, uncomplicated and engrossed in what they do. They make their path between the trees, inspiring us to do so, to branch out and be a singular flowing stream. Long live the music that flowed from thee, Bhimsen Joshi...
Posted by Snehith Kumbla at 03:06:00 No comments: Links to this post

Posted by Snehith Kumbla at 11:55:00 No comments: Links to this post

Posted by Snehith Kumbla at 10:53:00 No comments: Links to this post

Just like mortality, it is inevitable that you are bound to miss some movies on the film festival schedule. You are also bound to hear others say, "That was the best movie I watched man, too bad you missed it." Unable to come up with a repartee, complete with the description of the ultimate gem your friends had missed in turn, you can only turn sarcastic, wrung your hands and lament, "My life has lost all meaning on missing the film."
Then there is that rare dreadful film, which is best experienced with friends, rather than alone, for who will you make those witticisms to, or put absurd words into the lead actor's dialogues and laugh your head off.
Anyway, at the time of writing, the last film of the festival has been screened, and now the evening of awards and the closing ceremony will arrive. Bring it on please, same time, next year ...
Posted by Snehith Kumbla at 17:19:00 No comments: Links to this post

Directed by Sander Francken, of Netherlands, the three stories that feature in Bardsongs (2010) are set in Jodhpur, Ladakh (both in India) and Mali, Africa. Traditional songs mingle with the narrative with effective simplicity, as we are first treated to Rajasthani folk music, and a charming tale of a plastic waste collector, his camel and his son. In a twist of fortunes, we are told how life can spring surprises, and we can't ever conclude that whether we are lucky or unfortunate.

A teasing riddle in the second story is its core, as a teacher asks his young pupils, "What is the largest part of all knowledge?" A clever, curious boy goes through the books and finds no answer. He then requests his teacher to give him a time-limit of seven days, so that he can scour the city for the solution. The boy meets a fisherman, a hunter, a builder and finds that each one of them consider the work details of their profession, the largest part of all knowledge. The teacher asks the boy to keep trying, and in his travels, the boy meets two tourists and offers to guide them. They come upon a ruin and the boy informs them, "This is a thousand years old." One of the tourists looks up his guide book and grimaces,"It says hundred here."As the tourist looks at him suspiciously, the boy decides to leave the couple. He runs to his master and blurts,"The largest part of all knowledge is in the head, rather than the book." The teacher smiles kindly, and says,
"That's nice, but not the right answer." The answer that the teacher finally gives is both profound and arguable, most importantly - though-provoking.

Wisdom shines through a tale set in the rural remoteness of Ladakh, as in a journey to sell their beloved dzo (hybrid of yak, domestic cattle), a father and a daughter find the road to happiness. The soundtrack uses words from everyday life of each region and the local language and still gets the message across in each tale, the ubiquitous English subtitles do the rest. Unmissable.
Posted by Snehith Kumbla at 15:21:00 No comments: Links to this post 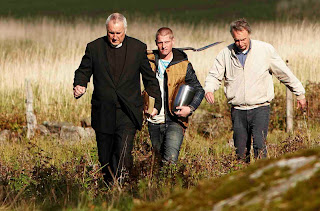 A road movie with pleasant twists and turns, pathos, humour and love, the rigours of senility, Old Boys (2009) tells of a group of old men in Denmark who stumble, pant and swear through their football practice. There is an exasperated middle-aged coach whom nobody listens to, yet he still keeps at the pep talk. Preparations are on for the annual game, where the team plays another ageing police team in neighbouring Sweden. The story focuses on Vagn, the team's depressed, unmarried goalie, even as he is forgotten by the team at a gas station and has to hitch a ride from a young man, who makes a living, eh, robbing gas stations. The other strand of the story follows the antics of the rest of the team on the bus on their way to the game. Real as they come, despite some contrived part, Old Boys is an entertaining watch.

As the independent movies screened at PIFF have shown, again this year, that neither Hollywood or 'Bollywood' can claim to have made movies with such disarming sincerity.
Posted by Snehith Kumbla at 15:39:00 No comments: Links to this post

The Pune International Film Festival  is back, the 9th edition been held in a season we can assuredly call winter this year. The movies are been screened across five multiplexes across the city, and today I am at Esquare. There are no queues outside the screens this time, no checking of the passes hung around our necks, anyone can just walk in during the screening time of the movie, or much before the screening. As a result, it is to some mild irritation - to having the best seats taken, that I enter a theatre for the afternoon show.

For the 6 pm screening, take corrective steps, arrive half-an-hour earlier, some 20-odd people are already there, the air-conditioning has certainly not been switched on, and there is a lot of chatter. There are no lone women, but many lone men. Many college students sit with half-turned bodies, cell phone to the ear, waving arms in the dark, beckoning their friends - the friends groping in the dark, stepping on a foot or two, as they gingerly make for the seats. The loners are a restless lot. Most pluck out their cell phones as glowing distractions, some stomp their feet from time to time, shake their legs.
An old man seated beside me, places a restless hand inside a black plastic packet. There is a constant rustle as he picks out an orange and devours the contents stealthily, self-consciously, wary of some crime. He then places a sealed water bottle on the bottle-holder and from the top of the bottle, allows the plastic packet to dangle in an awkward inventive arrangement. Finally satisfied, he folds his left leg over the right, the foot bare and hirsute. I switch to a chair beside me. In the semi-darkness a guy with a mike stumbles through the reading of the synopsis of the movie from the catalogue, but finishes impressively. Nerves. He holds up a hand and the ray of the projector hits the screen, all in one instant motion.

Subsequent posts shall have reviews of the movies watched at the festival and other tit bits on the location, films, arrangements, how is it to watch four movies a day, etc, etc, etc.
Posted by Snehith Kumbla at 19:28:00 No comments: Links to this post

Posted by Snehith Kumbla at 13:04:00 No comments: Links to this post

trailing
turning in the back seat
a sun ripening

rock to rock
airborne feet
dancing
Posted by Snehith Kumbla at 19:22:00 No comments: Links to this post