YOU GAVE US GREAT MEMORIES LARA 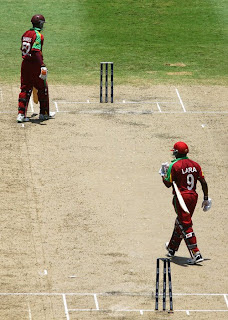 30.5 over. Broad to Samuels, OUT, what a desperate way to bring down the curtain on Lara's career. Samuels pushed the ball to mid-on, called for the run, Lara answered and almost immediately Samuels changed his mind, leaving Lara stranded. 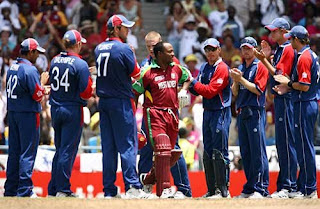 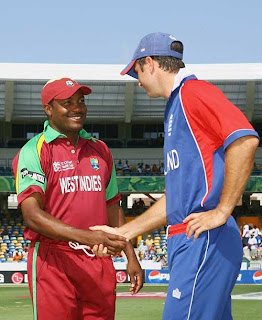 Michael Vaughan shakes hands with Brian Lara at the toss, in his final match for West Indies
Caption and photo courtesy: Cricinfo.com 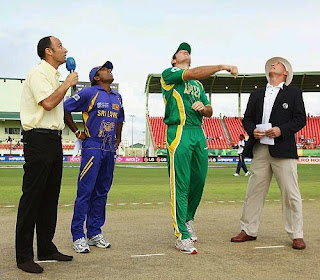 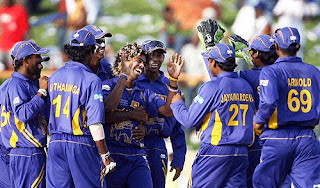 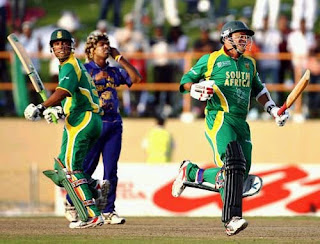 MALINGA INSPIRES AT THE DEATH WITH FOUR WICKETS IN FOUR BALLS, THOUGH SOUTH AFRICA SCRAP HOME BY ONE WICKET
Match 2: Sri Lanka vs. South Africa.
March 28.

Even as West Indies was surrendering to Australia’s mammoth total, South Africa restricted Sri Lanka to 209, with some diligent medium-pace bowling by Charles Langeveldt and Andrew Hall. South Africa was 206/5 with four runs to win in the 45th over.

Malinga, disappointing the whole day, yorked Shaun Pollock in the fifth ball of the over, the score: 206/6.

Next ball, he makes Andrew Hall offer a catch to cover fielder Tharanga.

The 46th over, Vass bowls five dot balls to Kallis, who takes a single off the last ball only to be caught behind off Malinga in the first ball of the 47th.

A hat trick, but more is to come. Ntini is bowled through the gates next ball, a stunned SA dressing room – scenes from the 1999 semi-final against Australia.

A determined Langeveldt, who earlier took five for 39, plays the rest of the over; almost gets bowled. A tense next over is played without a run.
The 49th over, it is Malinga to Langeveldt again, who takes a single. Left handed R Peterson edges the next past slip to a lucky boundary, in part celebration and hysteria he almost falls over the non-strikers stumps as the team celebrate. But in the end, it seems Sri Lanka go stronger to the next match, because they went down fighting. In courageous defeat is victory? We will know soon in case of Sri Lanka. 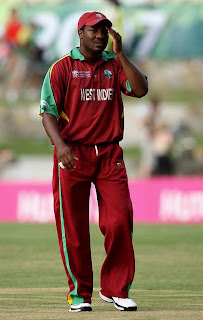 West Indian Captian Brain Lara looks dejected after his team lost to New Zealand on Thursday, after losing to Australia a day early

West Indies would have wanted to restrict the defending champions below 300, and it was the ground fielding that failed them at crucial moments. Australia was placed at 76/1, when Ramnaresh Sarwan ran out Ricky Pointing by a direct hit at the non-strikers end. Micheal Clarke came in and gave at least half-a-dozen run out chances to the host team who failed to capitalise.

Before Clarke got out for 41, hundred runs had been added and even Symonds’ and Hussey’s cheap dismissals didn’t stop Matthew Hayden from getting runs after scoring the fastest world cup century ever.

Sarwan had a chance to hold a Hayden hit after he reached his century at deep long off but misjudged it. The rain came down and the West Indians began their chase the next .In no time, they were 20/3 with Chanderpaul, Gayle and Samuels .

Again Lara came to the rescue with Sarwan holing out to Hogg for 29. 90/4. Lara plays beautifully, but it is an unequal battle, him against eleven Australians and a mounting run rate. He is out trying to sweep Hogg and getting LBW after a beautiful 77. Ramdin makes 52, but the asking rate calls for risk and batsmen perish.

TheWest Indies have no respite, they have another big match against New Zealand the next day. Lara complains of the scheduling, but there is nothing he can change. Australia are almost through to the semi-finals, looking more ominous, this was their sixth consecutive above 300 score in one day matches.

Red font colored teams most likely to make it to the semi-finals.
What is your pick?

All qualifying teams will play each other once in the super eight, except their own group team. 6 games each for each team. The top four teams then make it to the semi-finals.

Jamiacan police have looked from more than 24 hours of CCTV footage of people entering Woolmer's room and leaving it on the night of the murder. The police say this will help them narrow down the suspects. The videos clearly show faces and can be used as evidence. Meanwhile, Woolmer's family is still waiting for taking his body to Cape Town.

Ireland off-spinner Kyle McCallan admitted that he will have to ask his school headmistress to get more time if his team extend their World Cup run.